A new setting of a ninth-century Gregorian Mass, Schola Missa de Angelis, will be performed 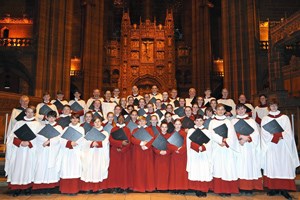 A new setting of a ninth-century Gregorian Mass, Schola Missa de Angelis, will be performed in a major concert in Liverpool Cathedral next month.

The Mass will be sung by the combined choirs of Liverpool Metropolitan Cathedral and Liverpool Anglican Cathedral, forming a 100-strong choir for this special performance. The concert will be take place in the grand setting of Liverpool Cathedral, with its extraordinary acoustic, on the evening of Friday 7th June.  Also in the programme will be works for choir and strings by Henry Purcell, and the concert will be followed by a reception.

Panufnik is known for her unique style, combining tradition, passion and spiritual sensitivity. Among her most frequently performed works is the Westminster Mass, commissioned on the occasion of Cardinal Hume’s 75th birthday. The composer will be in Liverpool for this, the first performance of the Schola Missa de Angelis in the north of England.

Christians across the North West understand the importance of the living tradition of English liturgical music, and have great affection for it. This unique performance, featuring two of the greatest cathedral choirs in the country, is sure to be a memorable occasion.

Tickets are £15, available from Liverpool Cathedral Shop or online here.