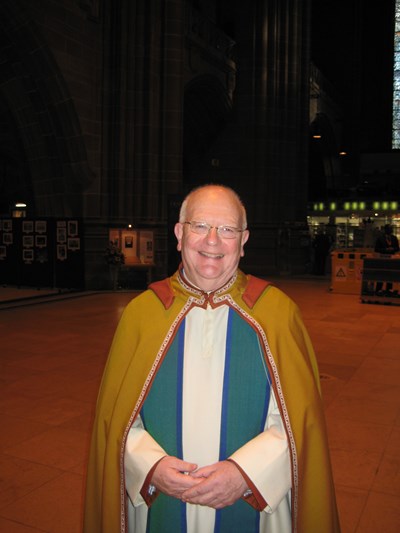 Sunday saw Canon Myles Davies, Canon Precentor and Vice Dean of our Cathedral Celebrate 40 years of ordained ministry. We took the opportunity to speak to him about his ministry over the years.

How are you feeling as you mark this milestone in your ministry?

My main feeling is one of thankfulness as I look back on 40 very happy and fulfilling years, all of which have been here in the Diocese of Liverpool.

How did you know you being were called into ministry?

I cannot remember when it all started for me, but it was certainly when I was still a child. My father died after a long illness when I was 8, and when I was about 10, I decided I would rather go to Church  - at St Philip’s in Litherland – rather than go to Sunday School. The clergy there became something of a role model to me, and I soon became convinced that this was what God wanted me to do with my life. Slowly and not always easily, God opened the doors for this to happen, and I was ordained at the youngest possible age of 23.

What was ministry like in the early days - how does it compare to now?

I went as curate to St Mary the Virgin, West Derby, a marvellous and busy parish with a strong choir and a large number of baptisms, weddings and funerals. I recall a Saturday in August one year when we had six weddings, on the hour, and we had already had two weddings and a funeral the day before! So it was a great place to learn how to do all the pastoral aspects of being ordained.

There were lots more clergy then, including curates, but it is hard now to think back to when all of us were men. West Derby had four of us on the staff, including Deaconess Lena Prince, who taught me so much about pastoral ministry. It was Lena and her ministry which convinced me that God was calling the church to open ordained ministry to women, and later on she came as honorary curate at St Anne’s when she retired. I had the wonderful privilege of preaching when she presided at the Eucharist for the first time, for which she had waited for nearly forty years.

How did you end up as Precentor and Vice Dean - how did God call you here?

I have always loved the music of the Church and have long believed that it is one of the ways in which God brings people to faith. Both at West Derby and at St Anne’s where I was vicar for more than 25 years, the choir was a hugely important part of our parish life together, and a marvellous way of involving young people in the life and worship of the Church. I thought that I would always be a Parish Priest, and never saw myself moving into full time Cathedral ministry.

In 2005, the role of Canon Residentiary was advertised as the Bishop and the Chapter wished to include a serving Parish Priest as a member of the Chapter. I applied for this and was appointed. When the post of Canon Precentor became vacant, I did not apply as we had a new curate in the parish and it would have been quite wrong to consider leaving her without her training incumbent. However when we were not able to make an appointment, Bishop James, Dean Justin (as he was then) and I found a means of me becoming Precentor whilst remaining Vicar of the parishes for a further couple of years. (By this time I had also become Vicar of the neighbouring parish of St Paul, Stoneycroft.) This lasted until Dean Justin moved to be Bishop of Durham when at last I became full time at the Cathedral and Acting Dean for a year.

What does the role of Precentor involve?

The Precentor is the person accountable to the Chapter for everything concerning worship: the music and the choir, the orders of service, the Cross Guild, the stewards, the flower team, the bell ringers, the Passion Play team. In addition as Vice Dean, I also stand in for the Dean on several occasions, and look after the Cathedral Company Committee which is there to reflect the concerns of the Cathedral congregation. Since earlier this year, I represent the Cathedral on the Rodney Street Association and Love Canning who are concerned about the local environment immediately around the Cathedral.

How important is good liturgy in the life of the church?

How have you enjoyed ministry in the cathedral?

I hope it’s pretty obvious to all who see me in the Cathedral that I enjoy thoroughly being and working here! The Cathedral Clergy all come from different backgrounds and traditions within the Church, but we all enjoy working with each other, and our gifts and skills complement one another’s very well. We have wonderful staff and volunteers too, and such incredible talent in so many ways. I wouldn’t have missed it for the world.

What have been some memorable moments at services?

Obviously the great occasions such as the Battle of the Atlantic come to mind, but two which I remember with particular pleasure are the service when we commemorated the May Blitz, and Dan Bishop and I created a soundscape which recalled the sounds which the city must have heard in 1941. The great moment of that service was to see everyone, including very senior clergy and our VIP guests swaying along and joining in with Dame Vera Lynn as we sang “We’ll meet again…” There wasn’t a dry eye in the house! And there was a wonderful service for the anniversary of the Coronation, when the Probationers, the youngest members of the choir, had about ten processions carrying the Crown Jewels, including a Crown -  which fooled quite a few of our visitors  - from the west end to the High Altar. The children must have walked miles in that service and I’m sure they all slept well that night!

Weekday Choral Evensong on a dark winter’s evening when there are just a few of us in the Cathedral with the most lovely music and the timeless words of the Book of Common Prayer are also very special, particularly the psalms.

What does the future hold?

I’m looking forward to carrying on with my present work and to a good number of significant events in the city in which the Cathedral will be playing a full part in the next two or three years.

How have you been celebrating your anniversary?

We celebrated the anniversary in the Cathedral on Sunday 27th September along with Back to Church Sunday when the Dean kindly invited me to preside and preach. We sang some of the music from the ordination service and we prayed by name for all of those who were ordained in the Cathedral that day. In the evening we had another celebration in St Margaret of Antioch in Toxteth, thanks to the kindness of Canon Bob Lewis, and this was very special as family and friends from all over were able to come together. A highlight of the service was for me to give flowers to my mother once again, and to give her God’s blessing, just as I did the first time I presided, forty years ago.

Where has God been in all of this?

When I preached at the Cathedral celebration, I recalled some words from one of the hymns we sang at the ordination:

So shall no part of day or night unblest or common be;
But all my life, in every step, be fellowship with thee.

Those words give the clue to where God has been – “in every step…” I give thanks that this is true.