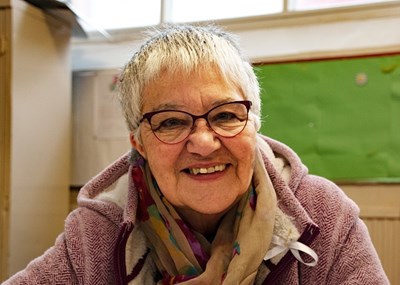 Canon Val received the award for services to Liverpool Cathedral, Liverpool Diocese and the commemorations for the First World War Centenary.

Val said "It is a privilege to be nominated for an MBE in the New Year Honours. It is a great honour to receive this for doing something that I love. The work for the First World War has been really challenging and couldn’t have happened without the support of our Archive team so they must share in the credit. Working at the Cathedral and in the Diocese is so varied and I am lucky to be able to spend my time with good friends and colleagues."

Dean of Liverpool, Dr Sue Jones and Vice Dean Rev'd Canon Myles Davies said: "We are delighted that Val has received an MBE in the New Years Honours List. Val has served the church diligently and is such a valued member of the Cathedral community. Val has made an outstanding contribution to the life of Liverpool Cathedral in her role as Archivist for many years and leads a team of volunteers whose work has been widely praised for its care of our twentieth-century archives. In addition to this, she continues to serve in her parish church of St Michael in the Hamlet with great distinction. It is such good news!"