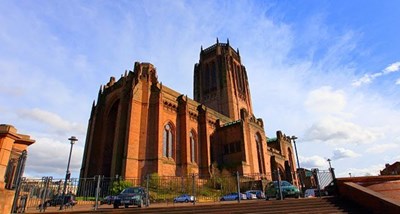 We are delighted to have been shortlisted once again in the ‘Large Visitor Attraction’ category of the annual Liverpool City Region Tourism Awards 2016.

This is Liverpool Cathedral’s second nomination for this award, following a win in this important regional award scheme in 2014.

Eryl Parry, Director of Enterprise at Liverpool Cathedral, said: “Putting together the application reminded me of the sheer breadth of our activities here as well as the impact we make collectively – writing a bid is one thing, having such rich material to draw from is quite another!”

This good news comes in the same week as the Cathedral hosted the gala dinner for Visit Britain's flagship tourism event Explore GB.

Explore GB enables international travel buyers to meet and do business with British and Irish tourism suppliers. We're honoured to play our part in a city which attracts 58.7m visitors a year.

Eryl Parry added: “More than 300 buyers from 40 countries met with fellow suppliers and attractions from across the UK at the Liverpool Convention Centre.  The sales appointments we had with buyers from China, Australia, Korea, Scandinavia, Belgium, France, Japan and others were transformed by the success of the gala dinner for 800 people, which attracted 2.5 million social media impressions and #ExploreGB trended for four hours.”

“Liverpool partners and those marketing the city as a tourism destination have also basked in the reflected glory, saying that the experience of coming to the Cathedral and what we delivered will in itself be the reason for decision-makers to choose to bring their future events and tour groups to Liverpool.”

The awards will be held on 19th May 2016. For more information, visit the Tourism Award’s website here.