Celebrating the role of women in new WW1 Nurses exhibition 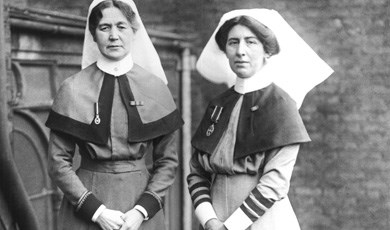 The new WW1 Nurses exhibition in Liverpool Cathedral tells the story of the part that the nursing associations played in WW1 both here and abroad.

The inspiration behind the latest exhibition exploring Liverpool Cathedral’s roll of honour came from the Nurses Memorial situated in the Lady Chapel. When the archivists started to research the names of the nurses and their connection with Liverpool, they discovered that they hailed from all over the British Isles. The nurses worked all over the battle front, some as far away as Iraq and India whilst others worked locally. Not all died in battle; some caught Spanish flu or malaria from their patients.

“We wanted to bring their stories out into the light” said Val Jackson, Cathedral Archivist. “As visitors walk around the exhibition, the stands paint a picture of the life and story of each individual woman.  It’s truly fascinating to see their different circumstances and where they were from.”

It was an important undertaking for Val and the team, as the names on the Nurses Memorial hadn’t been researched like this before. Val continued “We wanted to concentrate on the role of women in WW1 and it is a privilege to tell their story and is a continuation of celebrating Liverpool Cathedral’s roll of honour that started last year.”

The exhibition will be situated in the Memorial Chapel from 22nd September – 22nd October 2015. The exhibition was put together with support from the First World War Centenary Partnership, a network of local, regional, national and international cultural and educational organisations, led by the Imperial War Museum (IWM).