'Don’t forget the workers!' is your People's Winner 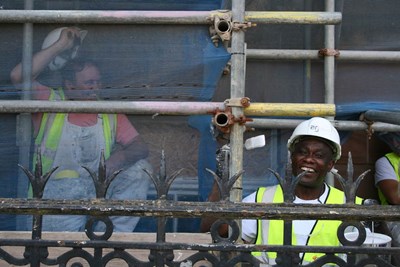 Brenda Larkin's photo 'Don’t forget the workers!' is the winner of this year's Peoples Winner public vote. The photo had already impressed the judges winning in the Hope Street category. We asked her for the story behind this excellent photo.

Brenda’s interesting photo ‘Don’t forget the workers!’ caught the eye of both the judges and the public as she was the worthy winner of not one but two categories.

Brenda said “I was walking round in the Hope Street corner looking for interesting subjects to photograph for the competition. I looked up and saw these workmen working on the building by LIPA. It was a baking hot day and there they were working behind this mesh up on scaffolding but they were having a laugh with each other and having fun. They called me over actually, seeing me with the camera so I took a few snaps. I was pleased with the way this photo turned out. I had to concentrate to get the angle and focus right and tried to use the scaffolding as a frame.”

“The workmen totally made the photo for me. The title of the competition was ‘summer in the city’ and yes we have had some fantastic things on over the summer – the 3 Queens, music festivals, all sorts but none of these events would be possible without the workers and volunteers who do such a good job with smiles on their faces. It was important to me that they weren’t forgotten.”

Retired teacher Brenda has entered the Cathedral photo competition in previous years, she said “I got a proper camera about 5 years ago and then experimented with the snaps after taking a photography workshop. It is a thrill having your photo on display in a magnificent building like the cathedral, that’s why I entered. It has inspired me to take more photos; I would encourage anyone to have a go.”

How does she feel about impressing not only the judges but the general public also, becoming this year’s Peoples Winner? “Wow, I am over the moon! When you are looking at your own photos you can be critical but you don’t know what others are thinking. It obviously made a connection with the visitors to the exhibition which is good to know. I’m very happy.” 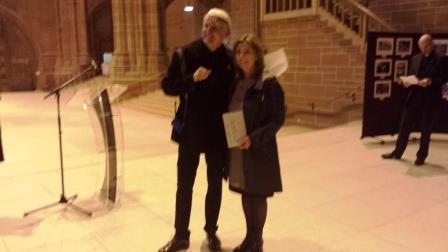