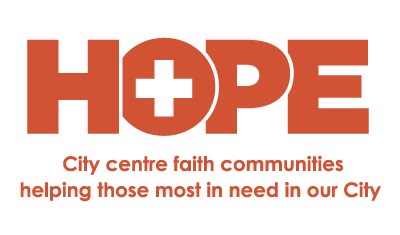 Hope+ Food Bank would like to thank everyone who contributed to their Advent Appeal "Give Hope at Christmas”.

The ‘Reverse Advent Calendar’, an idea originally from Pastor Jo Jan Vandenheede of the Nordic Church, was very successful. It captured the imagination of many, particularly families and schools. This helped fill not only the Hope+ van, but other people’s vans too

A very special thank you goes to the congregation of the Shrine of the Blessed Sacrament for their continuous support.

Hope+ benefitted from the Liverpool 5K Turkey Trot. Contest Sports, the organisers of the Boxing Day event, made part of the entrance fee a donation to Hope+. The generosity of the competitors was so great that donations were still being loaded into the van as the first few runners were crossing the finish line – over 530Kg of food was received.

The Hope+ volunteers of course need to be mentioned.  Thank you to all those who were in Liverpool over the Christmas and New Year holidays, turning out even on Bank Holidays. Even while they were away people helped make the Christmas pantries work.

At present Hope+ helps an average of 300 people each week.  There’s a continuing need to #filltheseshelves, so they look as full as they do at the moment.  So please keep donating when you can.

Don’t forget to look out for a short series of reflections for Lent.  This year will also feature in the USPG Lent study guide, available to anyone who would like them.