It’s been out of this world as over 200,000 people encountered the Earth at Liverpool Cathedral 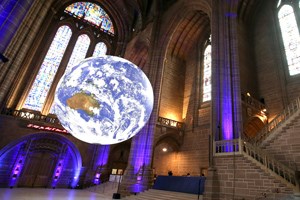 Thank you, to the amazing 202,677 of you who came to Liverpool Cathedral and encountered the earth since Luke Jerram’s seven-metre spherical artwork ‘Gaia’ was installed on Saturday 25 May

Thank you, to the amazing 202,677 of you who came and encountered the earth at Liverpool Cathedral since Luke Jerram’s seven-metre spherical artwork ‘Gaia’ was installed on Saturday 25 May. During its four-week residency, it dazzled visitors, worshippers, event and concert-goers alike as it hung majestically in the Cathedral’s Well.

Over 170,000 visitors from across the region and beyond came to the Cathedral just came to marvel at Luke Jerram’s fabulous 3D replica of the earth. Over 14,000 people not only experienced the earth floating above their heads but the installation’s 120dpi detailed NASA imagery of the earth's surface from another perspective after climbing the Cathedral’s Dulverton Bridge.

You made social media come alive as you took the whole world in your  hands, posting and sharing pictures of the artwork taken from every conceivable angle.

Part of Liverpool’s River Festival 2019, Gaia was one of the key pieces in the Changing Tides creative programme and it was an opportunity to see our planet (to scale), for free at Liverpool Cathedral until late on Sunday 23 June.

Visitors experienced a varied programme of earth-inspired events under the installation such as talks, music, storytelling, yoga and even the first British astronaut in space, Helen Sharman put in an appearance. One of the other highlights was the ‘Quiet Hour’ for those who might have found the huge crowds daunting, for example, someone who has an autism spectrum condition or sensory processing differences could contemplate the artwork away from the hustle and bustle.

Prayer stations were placed around the Cathedral to help them reflect on the earth’s significance in creation. Around 48,000 candles were lit while Gaia was in place compared to 10,000 usually used in the same time period.

The Dean of Liverpool, the Very Revd Dr Sue Jones, who has been astounded by the response to the installation said, “It has been such an amazing privilege to be able to host so many people in our building to encounter such a breathtaking experience. As a cathedral built by the people for the people, to the glory of God, we are a focal point for people in Liverpool and visitors to the city. The Earth or Gaia installation has been brilliant. I’m thrilled with the impact it has had and the profound questions it asks about our role in God’s world.

It’s been a tremendous effort from everyone involved and I would like to thank Liverpool City Region, Arts Council England, Liverpool City Council and the Mayor of Liverpool, Liverpool City Stars, our staff and volunteers. Above all, thanks go to the many, many thousands of you who came from far and wide to be part of our Gaia experience.”

“From the moment we announced the earth as part of this year’s River Festival, there was a real buzz around this installation. After it opened to the public, the feedback we received from visitors was overwhelming and the artwork resonated strongly with many.

“We are committed to bringing incredible, free art to people and this visually stunning piece, with a message about the fragility of the world in which we live, was an unforgettable highlight of our maritime celebrations.”

This was my first visit and shame on me as i live 20 minutes away, what a beautiful building....

We purely went to see the earth exhibition which was brilliant, my young kids loved it and the buzz and atmosphere was great. Hope they continue to bring these events to Liverpool.”

“I loved the interior of the cathedral, from the lovely stained glass windows to the model of the earth spinning above us in the foyer. You should see this piece of heaven on earth.”

It’s such a beautiful cathedral the biggest in Britain, we are so lucky to live in this amazing city , and the world floating is spectacular to see & combined with a children’s choir singing as we walked in was so beautiful to hear , it’s breathtaking to see the size inside.”