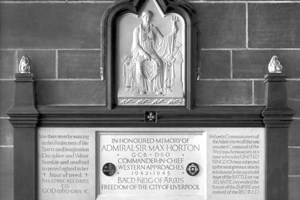 Hear from Canon Val Jackson about Admiral Sir Max Kennedy Horton, including his work in the Atlantic and his memorial in North Wales.

Admiral Sir Max Kennedy Horton GCB, DSO & Two Bars, SGM (29 November 1883 – 30 July 1951) was a British submariner during the First World War and commander-in-chief of the Western Approaches in the latter half of the Second World War, responsible for British participation in the Battle of the Atlantic.

On August 9th 1951, the funeral of Admiral Sir Max Kennedy Horton took place in Liverpool Cathedral. The funeral was held with full naval honours and was attended by representatives of the King, Prime Minister and Mr Churchill.

Max Horton was promoted to full Admiral on 9 January 1941 and was appointed Commander-in-Chief, Western Approaches Command on 17 November 1942. Horton took his post as C-in-C, Western Approaches on 19 November 1942, when he became responsible for the fighting the Battle of the Atlantic. His command extended from the Arctic to Portugal and halfway across the Atlantic to what was known as the ‘chop line’.. He flew his flag in Derby House, Liverpool. He was meticulous in following every aspect of his command no matter how menial and as a result established regular training programmes for the men under his command.

The Atlantic lifeline – bringing troops, equipment, food and other supplies – was crucial to keep Britain fighting. More than a million tons a week were needed to feed everyone and to generate the strength to fight. Several ships were lost each day, and just weeks’ worth of food was in store at any one time. Germany’s remaining surface craft posed some threat, but this paled in comparison to the U-boats. Their objective: to starve Britain out. As Churchill wrote: “The only thing that ever really frightened me during the war was the U-boat peril.”

In his role as Admiral, he instituted a series of changes in the way the escort ships were to be used. In addition to the existing escort group system, in which groups of ships were assigned to defend the perimeter of convoy boxes, Horton instituted a system of support groups, who would also travel with the convoys, but have much more freedom in pursuing submarines to the death, even if such action necessitated leaving the convoy for longer periods of time than were considered acceptable for escort groups. Horton's support groups proved to be decisive in the crucial spring of 1943, taking the battle to the U-boats and crushing the morale of the U-boat arm with persistent and successful counterattacks.

His tenure as C-in-C Western Approaches was remarkable; having built an enormous and ruthlessly administered command he out-thought and defeated an implacable enemy. The importance of the campaign was, simply, had he not won it the Allies could not have defeated Germany.

Admiral Horton is widely credited, along with his predecessor, Admiral Sir Percy Noble, as being one of the most crucial figures in the Allied victory in the Atlantic. In August 1945, Max Horton, at his own request, was placed on the retired list in order to facilitate the promotion of younger officers. He was made a Knight Grand Cross of the Order of the Bath in June 1945 and was Bath King of Arms from January 1946. He was awarded the Freedom of the City of Liverpool at the Philharmonic Hall on the 18th of September 1946.

The ashes of Admiral Sir Max Horton were placed in the South arm of the Eastern Transept at the foot of the North-East pier. In 1957, a stone tablet was carved by Edward Carter Preston and commemorates the life of Admiral Horton.

FREEDOM OF THE CITY OF LIVERPOOL.

In 2019, Terry MacDonald a local sculptor who has worked on many of the memorials in the Cathedral achieved his ambition and gave a towering sculpture of Max Horton to the village of Rhosneigr, North Wales where Max Horton was born and spent his childhood years. It was unveiled at a special ceremony attended by civic dignitaries and military personnel.

The following words were read at the funeral service of Admiral Sir Max Horton:

They that go down to the sea in ships, that do business in great waters: these see the works of the Lord and His wonders in the deep.

In the day when the waters had well nigh overwhelmed us, our brother, here departed, apprehended the creative power in man, set himself to the task to conquer the enemy.

Solemnly we acknowledge the working of the spirit of God in man.