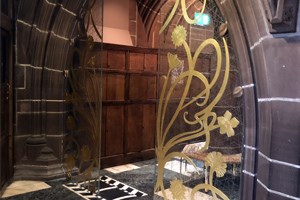 The dedication service for the space fell within a week of International Women’s Day which seeks to celebrate the acts of courage and determination of ordinary women who have played an extraordinary role in the history of their countries and communities.

The Josephine Butler Trust commissioned the work to restore the Noble Women windows within the Lady Chapel. The nineteenth century social reformer and campaigner for women’s rights is one of the 12 women featured in the windows. The trust works to keep her vision alive and annually celebrates current social reformers.

The Trust wanted to celebrate the life and work of Josephine Butler and the other women by opening up the space, creating light and peace as a place for reflection and learning. Including where people can find information on issues facing women today.

Liverpool Cathedral was pioneering in recognising women and their role in society when they commissioned the Noble Women windows, probably the oldest surviving stained-glass windows in the cathedral.

Mike Darwell, the current cathedral architect was commissioned along with artist and designer Sarah Galloway to create the space. The intricately etched glass screens, based on symbolic flowers representing Josephine’s values, are the stand out feature and on entering, the newly installed lighting draws attention to the Noble Women. The Cathedral maintenance team skilfully carved the interior wooden seating.

The Trust is delighted with the completed work and hopes that the newly furbished space will offer a place of reflection, contemplation and learning for everyone.

Josephine Butler was a nineteenth century social reformer who campaigned for the rights of women, especially the marginalised. She actively promoted women’s education and gender equality alongside speaking out about the need for moral reform on behalf of the prostitutes and streetworkers of her day. This resulted in the raising of the age of consent to 16 and the repeal of the Contagious Diseases Act.

She is one of the twelve Noble Women depicted in windows in the Lady Chapel.