Light in the darkness 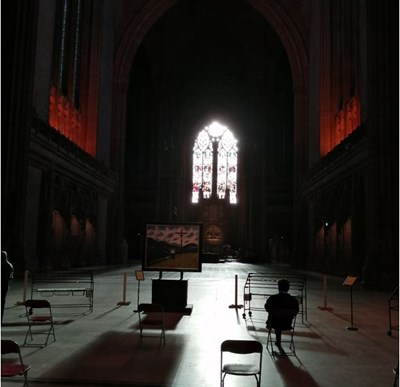 A last look back at Christmas

Many who are  old enough will remember well the iconic 1979 TV series of John le Carre’s novel ‘Tinker, Tailor, Soldier, Spy’. It starred Alec Guiness as spy George Smiley. The theme music became almost as famous; a haunting version of the ‘Nunc Dimittis’. In English:

“Lord, now lettest thou thy servant depart in peace according to thy word.
For mine eyes have seen thy salvation,
Which thou hast prepared before the face of all people;
To be a light to lighten the Gentiles and to be the glory of thy people Israel.”

Millions of people were suddenly exposed to these remarkable words from St. Luke’s Gospel for the first time. They are words, however, which are spoken or sung in every Cathedral every evening of the year. Liverpool Cathedral is no exception. That is because they were set hundreds of years ago by Cranmer as part of the service of Evening Prayer, or Evensong.

This Sunday, we will have those words too in our Gospel reading for the 10.30am Eucharist. This is the nearest Sunday to 2nd February, when the church remembers the 40th day of Jesus’ life. He was taken – ‘presented’ in fact – by Mary and Joseph at the Temple, as was required by Jewish law. So far, so normal. However, what happened next astonished them, and has continued to astonish the world since.

Mary and Joseph encountered, within the Temple, two elderly and godly people; a prophet, Anna and a man, Simeon. When Simeon held the tiny form of the infant Jesus, inspired by the Holy Spirit, he uttered the now famous words of the ‘Nunc Dimittis’. Though not in Latin or English, it has to be said! Quite remarkably, he prophesied about this scrap of human life some unbelievable things. Jesus was, of course, born a Jew, into a Jewish family and culture. Jewish worship was his home territory. Simeon said that he was “to be the glory of thy people, Israel”. Quite what that means, many are still trying to work out! Given the very tough history that the Jews have endured in the millennia since, they may sometimes wonder what God intended for their ‘glory’. Tomorrow, we will commemorate ‘Holocaust Memorial Day’ (HMD), the anniversary of the liberation of Auschwitz, one of the notorious Nazi death camps. We will recall the genocide against Jews by that murderous regime under the leadership of Adolf Hitler; which led to the extermination of some six million Jews. HMD is also an opportunity to recall all genocides and the stages of human behaviour that lead to them. It is a sobering occasion, but one which we must remember if we are to learn for the future.

Simeon, a devout Jew, also prophecied that Jesus, amazingly, would be a light for all Gentiles – that is non-Jewish people. People like me. Which I find quite mind-boggling, and very moving. So, the place of light, and especially candles, is part of the warp and weft of our celebration of the Presentation of Christ in the Temple. Which is why it is often known by the rather snappier title of ‘Candlemas’.

Candlemas is an important pivot point in the church year. It offers us one last look back at Christmas. It was at Christmas when we heard the opening verses of John’s Gospel (John 1:1-14) that Jesus is the light that has overcome the darkness. But then Candlemas leads us on into suffering – ironically into greater darkness, or so it seems. Simeon shares another prophecy – this time specifically for Mary.  That ‘a sword will pierce your soul’. Not the nicest thing for a new mum to hear! But these words look ahead some 33 years to the time when she will stand at the foot of the cross looking up at her son, dying a criminal’s cruel death and in utter agony. Candlemas prepares us to look ahead to Lent and Holy Week, and the last days of Jesus’ life. Maybe the portentous nature of the title music for the 1979 TV series is apt. Life is full of darkness – even Jesus knew that. The great thing is that the darkness doesn’t win!

Another film that I saw not long after the John le Carre series was ‘The Hiding Place’. It is based on the book of the same title by Corrie Ten Boom. She and her family lived in the Netherlands during the Nazi occupation. Although they were Christians, they felt moved to hide desperate Jews, who were under the threat of being deported to the Nazi death camps. Eventually, they were betrayed and were themselves removed to Ravensbruck. There, Corrie’s sister Betsie died, as did other members of her family. By some miracle, Corrie was released and then wrote the book. But Betsie’s amazing faith lives on in the book. Even in the darkest and hellish days in the camps, Betsie’s faith still shone through – a tiny light in the darkness.

I don’t know what dark days you have been through, or what dark days may lie ahead for you. But the message of Candlemas is that the light of Jesus does still shine on. It may seem as vulnerable and insignificant as a tiny baby. But it is still there. Because God’s light is made real in the everyday acts of love and kindness by ‘ordinary’ people who do extraordinary things. At the Cathedral, we pray each and every day that everyone who encounters this place will encounter the God who knows and loves them. God is bigger even than holocaust. God is bigger even than the darkness in each of our hearts and lives. Which is why the Nunc Dimittis that we say or sing every day at the Cathedral closes with a Doxology – a hymn of praise to God: “Glory be to the Father, and to the Son, and to the Holy Spirit. As it was in the beginning, is now, and ever shall be, world without end. Amen.” Glory be indeed!

You may wish to chew a bit more on Simeon’s words. If so, the website of St. Martins-in-the-Fields in London has a short but insightful reflection:

There are events taking place all over the world for Holocaust Memorial Day tomorrow. A national ceremony for the UK will be live-streamed. Full details can be accessed at:

Finally, you would be very welcome to join us this Sunday, either for the 10.30am Eucharist or the Epiphany Carol Service at 3.00pm. Full details of our regular worship may be found at:

There will be no tinkers, tailors, soldiers or spies – just the story of a tiny baby who brought joy to Simeon and Anna, astonishment to his parents, and light and glory to the rest of us!