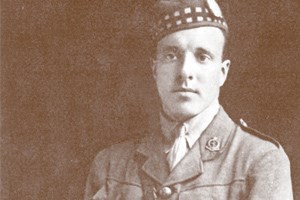 To mark the anniversary of Noel Chavasse’s death this Friday 4th August, the ‘Roll of Honour’ at Liverpool Cathedral will be open on the Citation page for Noel Chavasse during the whole month of August and can be viewed in the Memorial Chapel.

On the 4th August 1917 Noel Chavasse, son of the second Bishop of Liverpool, gave his life in the service of his men and his country. Noel Chavasse had trained in Liverpool as a doctor before enrolling with the Royal Army Medical Corps in WW1 and being attached to the Liverpool Scottish Regiment. In 1915 he won a Military Cross at Hooge and the first of his two Victoria Crosses at Guillemont in 1916. His first consideration was always to his men and proved his bravery by rescuing wounded soldiers from difficult situations. On 2nd August 1917 he was seriously wounded by a shell and died two days later. He was awarded his second Victoria Cross posthumously. He is the only person to have received two Victoria Crosses in WW1. His grave is at Brandhoek in Belgium.

The Chavasse family were instrumental in the creation of Liverpool Cathedral. Francis James Chavasse was an Anglican bishop and father of four sons who served with distinction in the First World War. In 1900 he was appointed as the second Bishop of Liverpool and held the see from 1900 to 1923, during which time he played a large part in the commissioning and the early phases of construction of Liverpool Cathedral. The story of Noel and Christopher Chavasse is an inspiring story of courage, service, sacriﬁce and faith lived out under ﬁre. We commemorate their service along with the rest of this important family this autumn.

To commemorate the Chavasse family we will be holding several events in the Cathedral in September:

’Celebrating the Chavasse family’ -  September 12th – October 8th 2017 -  An exhibition will be on display in the Memorial Chapel. The story of Noel and Christopher Chavasse is an inspiring story of courage, service, sacriﬁce and faith lived out under ﬁre. We commemorate their service along with the rest of this important family.  Free admission. More here.

‘Brothers in Arms’ - September 15th & 16th 2017 - A drama presentation telling the story of Noel and Christopher Chavasse, twin sons of the Bishop of Liverpool. Tickets are available here. £3. There will be access to the exhibition before the drama. Doors will open at 18.10; performance at 19.30 in the Lady Chapel.

An evening of Conversation - September 18th 2017 – In conjunction with Liverpool University Continuing Education. Lady Chapel 18.30. Dr Fiona Reid highlights the way in which soldier recognised the signs of mental trauma and tried to support in each other in ways that were not always effective but were based on compassion and understanding. Free admission. More here.

‘The Chavasse experience’ September 21st and 28th 2017 - Join us for adult educational workshops looking at the life of Noel Chavasse. These will include a WW1 trail of the Cathedral, a presentation on the life on Noel Chavasse and the opportunity to create a piece of BookArt. £5. More here.