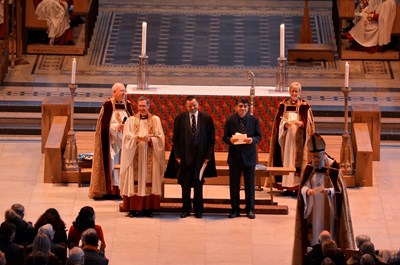 In what we believe is the first appointment of its kind in the country the role of Canon Scientist has been established to make connection between sciences and our Christian faith.

The Dean installed Canon Mike at Evensong on Sunday 9th February. Mike will be a residentiary canon and member of Chapter but as a self-supporting minister will combine this with his work as a lecturer in Radiotherapy Physics at the University of Liverpool.

Canon Mike began work in the UK’s National Health Service more than 30 years ago, as a Radiotherapy Physicist at the Christie Hospital, Manchester. Among his many achievements he was part of the team that set up Rosemere Cancer Centre in Preston in the late nineties. As well as lecturing in Liverpool, Mike is an Honorary Lecturer (Faculty of Biology, Medicine, and Health) at the University of Manchester as a supervisor for the national HSST Program for doctoral level training of Clinical Scientists within the UK.

Mike was ordained in 2013 having trained at Westcott House, Cambridge. He has focused his ministry on cathedrals in Blackburn, Chester and now Liverpool where he has been cathedral chaplain since 2018.  He is a member of the Society of Ordained Scientists and has given numerous talks on Science and Faith to schools, colleges, churches and other institutions for many years.

Canon Mike’s cathedral role will focus on encouraging dialogue about science and faith.  As a place of encounter the cathedral is keen to engage with a wide range of people and having an individual to help facilitate interpretation of so many current issues - climate change, medical ethics, health initiatives and information for cancer, dementia and mental health - brings an added dimension to the encounter we offer.

Mike has already started this work through organising the Gilbert Scott lectures on Science and Faith which started last year and a second series will occur in May. He will also look at

Dean Sue said “elements of the society and church feel that science and faith can’t mix but we believe if more people are to encounter God through Liverpool Cathedral then we must bridge that gap. I am so thrilled to install and welcome Canon Mike to the Chapter of this cathedral. His skills, vast experience, rich knowledge and passion for his subject is immense. And his deep pastoral sensitivity enables him to bring people along a journey of understanding of the relationship between science and faith. I pray that he continues to help others on that journey as he embarks on this new ministry at Liverpool Cathedral.”

Canon Mike added “throughout my career I have felt God’s call to serve his people at the heart of my personal vocation. My work in radiotherapy has been a lifelong vocation, God’s call to serve and support cancer patients.  My cathedral, church and chaplaincy work has been about supporting and sustaining people. Now as Canon Scientist I can continue that service in a range of ways. I look forward to the challenge, with the help of God”.