Liverpool Cathedral - Marking the Centenary of the End of the First World War. 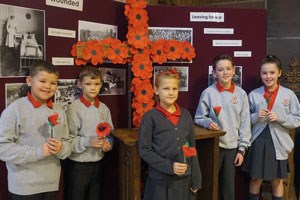 At 6:00 am on Remembrance Sunday, a lone piper will stand outside Liverpool Cathedral and play the ‘Battle’s Over’ to mark the exact time the Armistice was signed in 1918 and signal the finale of the four-year commemoration of WW1.

To the front of the Cathedral, near the entrance stands a wire 6ft silhouette. The ‘Tommy’ figure is part of the country-wide tokens of remembrance and taken from the ‘There But Not There’ logo. This is based on a photograph by Horace Nicholls a pioneering photojournalist whose eldest son George died at Arras in 1917, aged 22.

Sophie Brunner from the NDR Philharmonie said, “Why are we doing this? So we can get to know each other better and do the opposite of what sets off wars: listen to each other and connect with each other.”

The experience was not only a musical one, as the boys from both choirs took part in an educational project. They interviewed their grandparents about their memories and experiences of war.

On the eve of the Armistice, Saturday 10th November, Liverpool Cathedral Choristers and the Knabenchor Hannover will then perform as part of the Britten War Requiem concert.

Before the 10:30 am Choral Eucharist for Remembrance Sunday, the Cathedral Bells will be rung half-muffled. For the service, both boys’ choirs will be joined by Liverpool Cathedral Girls’ Choir in singing pieces in both German and English. At 11:00 am Canon Myles Davies (Vice Dean and Precentor) will lead a two-minute silence

As part of the national commemoration, our biggest bell, Great George will be struck at 12:30 pm and starting at 4:00 pm there will be a quarter peal on eight bells with the muffles removed.

Over 300 school children from across the Diocese of Liverpool have attended Remembrance workshops at the Cathedral. Run by the Cathedral’s education team, children gain an understanding of what war was like and why so many people paid the ultimate sacrifice.

During the workshops, they ‘met’ Noel Chavasse, son of the Bishop of Liverpool, who was awarded two Victoria Crosses and interviewed a current serving member of the armed forces. Each workshop ends with a time of reflection in the Lady Chapel to think about remembrance using their own memories. The children display their handmade poppies on a cross.

“Our Remembrance workshops are always popular – this year we could have filled them twice over. I think that awareness has increased as the centenary of the Armistice has approached. Schools are really trying to help pupils remember those who’ve served in the war, understand the sacrifice they made and how difficult the circumstances of war are. Our workshops are an interactive way of doing this.”

Please note on Sunday 11th November the Tower will be opening one hour later at 1:00 pm due to Great George being rung for Remembrance Sunday.