Liverpool Cathedral offers a warm Christmas welcome to all – including robins 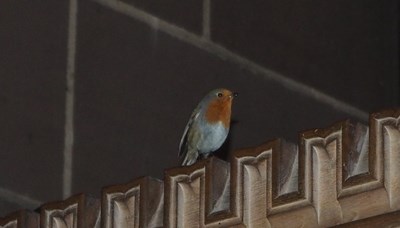 Our new member of the congregation has become a media sensation

When Ian Prescott, 54 and Mick Watterworth, 57 from Liverpool Cathedral’s maintenance team started to unpack this year’s 40 ft. Christmas tree, little did they know they would also unpack a new member of the congregation.

“We quite often get pigeons flying around and they’re easy to catch. A robin coming in with the tree is quite special. We first spotted it watching us when we were unwrapping the tree. We tried to catch the robin, to set it free. But it was too quick. I think it wanted to stay.”

The robin has been in Liverpool Cathedral since 29 November and was present for the Lighting of the Tree Service which the ECHO filmed on Sunday 3 December.

“Our cathedral is obviously not a robin’s natural habitat, so we did try to catch it to it release it but we were unsuccessful. It’s now part of the Christmas staff.”

“Here, he is sat on the top of the sound box helping Dave Corns, our Head Verger out. He’s listening for feedback! It came in with the Christmas tree and this morning those of us sat under, or near, the tree could hear it singing along for most of the service. It’s bringing many a smile to those sat at the front of the congregation near the tree, and really getting the Christmas season of to an excellent start.”

You can also find our robin on

After being well-cared for by our Cathedral staff, our friendly robin has flown from Liverpool Cathedral to pastures new.