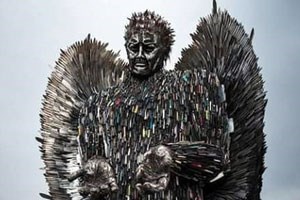 The sculpture, which stands 27ft high, will be installed outside Liverpool Cathedral on 29th November and will remain in place until 31st January 2019. Created by Alfie Bradley, it is memorial to those whose lives have been affected by knife crime.

The Knife Angel was created by artist Alfie Bradley as a national monument against violence and aggression. The sculpture, which stands 27ft high, will be installed outside Liverpool Cathedral on Thursday and will remain in place until 31st January 2019.

A memorial to those whose lives have been affected by knife crime, Alfie has designed and created the artwork single-handedly at the British Ironworks Centre. 100,000 knives were surrendered and collected during nationwide amnesties in 2015/2016. The Centre provided knife banks for the amnesties with 43 police forces across the country involved.

“Sadly scarcely a day goes by without hearing another tragic story of knife crime. Through hosting the Knife Angel at Liverpool Cathedral we want to show solidarity with the victims of this crime and make a powerful statement to everyone who comes to visit.

“As people encounter the artwork, we hope this helps them make sense of the issues it raises by coming in, lighting a candle or reflecting in one of our chapels. We will continue to pray for peace in our city and beyond.

“As well as standing alongside all those affected by knife crime we want to urge those who carry knives to recognise the pain they cause themselves and others as we work to a day when we truly see peace in our streets.”

Former chorister and lay clerk, Rob Jackson has been instrumental in bringing in the Knife Angel to Liverpool Cathedral. In his role as a nurse clinician at the Royal Liverpool Hospital has spoken to 95,000 young people across the area of the realities of being involved with knife crime.

Inspired by the story of the attempt to site the Knife Angel in Trafalgar Square, Rob contacted Clive Knowles CEO of the British Ironworks Centre to see about coming to Liverpool. He said:

“We’re hoping that by bringing the Knife Angel to Liverpool Cathedral it opens the debate about knife crime and its impact. It’s not about scaring people but to get them to start talking about its effect on real people. Something I witness in my job on a regular basis. This is about prevention of knife crime, using the Knife Angel so people to understand how carrying a knife and the reality of knife crime will not only affect other people but them personally.”

Aidan Kehoe, chief executive at the Royal Liverpool and Broadgreen University Hospital NHS Trust said, “I am delighted that the Knife Angel is on view for local people, in such a prominent place in the city. Its presence represents the gravity of knife crime and acts as a strong message about how various community organisations are working together to reduce knife crime in our community.

I am extremely grateful and proud that one of our nurse clinicians, Rob Jackson has been such a leading force in bringing the Knife Angel to Liverpool.

Both Rob and the amazing team in our emergency department work tirelessly to provide care and support to those who sustain such life-threatening injuries or in or more serious situations support loved ones who lose a relative under such tragic circumstances.”

Chief Constable of Merseyside Police, Andy Cooke QPM said: “Merseyside Police is supportive of anything that prompts a discussion about knife crime and encourages people to stop and think about the devastating consequences it can have.

“We are committed to tackling knife crime across Merseyside, however we can’t do this alone and it’s vital that we work closely with our partners and the community.

“Education is essential and we regularly visit schools to reinforce the message that it is never acceptable for someone to carry a knife. I would urge anyone who believes that they know someone is carrying a knife or other bladed weapon to strongly discourage them from doing so. Everyone has a responsibility for this: police, partners, parents, families, teachers and friends.

"We use a variety of approaches to combat knife crime including making the most effective use of stop and search powers- a fundamental part of our efforts to make communities safer. This is done through an intelligence led approach to ensure it is correctly targeted and is a critical power in our efforts to tackle violent crime.

“We are determined to eradicate knife crime and remove these weapons from our streets and by taking a collaborative stance with our partners, we will continue to educate, enforce and act on any information given to us to bring those involved in this type of offending to justice.”

Richard Kenyon, Everton in the Community CEO, said: “We’re pleased to see the arrival of the Knife Angel in Liverpool and to have played a part in its journey to our city. The statue will help raise awareness about the importance of lowering knife crime.

“We have been working on the ‘Real Men Don’t Carry Knives’ campaign for over a year with great support from Anfield Boxing Club, LFC Foundation and Joanne Matthews from Liverpool City Council and run regular workshops, football festivals and awareness days to help tackle knife crime across Liverpool. The arrival of the statue is another step in the right direction to combatting these crimes and I would urge everyone to go to Liverpool Cathedral to see what is a really powerful piece of artwork.”

You can share your photos or videos with us by tweeting #KnifeAngelLiverpool on social media.