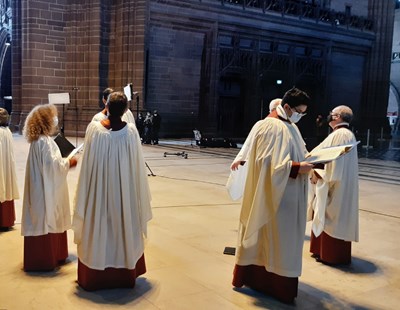 Liverpool Cathedral Choir joined the choirs of St Pauls Cathedral and Southwark Cathedral for a special online choral festival to be broadcast at 6 pm on 11 May 2021. Watch it live at www.clergysupport.org.uk/festival

The prestigious Clergy Trust Festival Service is the world’s oldest choral festival. Held at St Paul’s Cathedral for over 366 years it involves three choirs singing together in a beautiful act of worship. Last year our cathedral choir was due to take part in the festival which was unfortunately cancelled due to Covid19.

So this year we are delighted that the organisers have brought together a virtual act together with a reduced cathedral choir being filmed in Liverpool for the broadcast. Our choir was recorded singing Vaughan William’s anthem O Clap Your Hands and joined the other two choirs for a special online recording of the hymn “All my hope on God is founded”

In 1655, a group of City merchants held the first Festival service to raise funds for clergymen, and their families, who found themselves increasingly destitute under Oliver Cromwell. Over the decades, the Festival has grown to become an annual highlight of the Anglican calendar, attended by Archbishops and Bishops, by the Lord Mayor of London, and by the many supporters and beneficiaries of the charity which became Clergy Support Trust.

Director of Music, Lee Ward said “Liverpool Cathedral Choir is very proud to have been invited to take part in the Clergy Trust Festival service.  The choir had been looking forward to travelling to London to sing at St Paul´s Cathedral but were delighted that we could still take part in special filming at our Cathedral. This, and having  to have a reduced choir due to Covid restrictions presented many challenges but we are very pleased with the resulting sound and look forward to seeing our efforts broadcast alongside the choirs of St Pauls and Southwark on May 11th”

What’s more, we’ve been invited to sing in person at next year’s festival and we very much look forward to being able to sing in the magnificence of St Pauls."

You'll find more information about the world’s oldest Choral Festival in this article on the Clergy Support website.