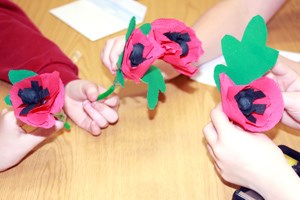 Run by the Cathedral’s education team, children gained an understanding of what war was like and why so many people paid the ultimate sacrifice.

Over the last few days over 130 school children from four schools across the area have attended Remembrance workshops at Liverpool Cathedral. Run by the Cathedral’s education team, children gained an understanding of what war was like and why so many people paid the ultimate sacrifice.

“Our Remembrance workshops are always well attended and received. Through our interactive programme, we try to help children remember those who’ve served in the war, understand the sacrifice they made and how difficult the circumstances of war are.”

During a drama, the children ‘met’ Noel Chavasse, son of the Bishop of Liverpool, who was awarded two Victoria Crosses, during which he told them about his experiences of life in the trenches. They also interviewed a currently serving member of the armed forces dressed in WW1 uniform who described how he would have protected himself in the trenches.

The workshops also had an opportunity to learn why food was rationed and how little people were allowed to have. Children experienced the sounds of an air raid from inside an Anderson shelter, learnt about gas masks and evacuation. The children made paper ‘prayer planes’ which were flown into a cargo net suspended from the Dulverton Bridge.

Children learnt about the symbolism of the poppy and heard “In Flanders’ Fields”, the poem which inspired the remembrance poppy. While the children made poppies, they remembered someone who has died.

Each day ended with a service of reflection in the Lady Chapel to think about Remembrance using their own memories. The children displayed their handmade poppies on a cross. During the service, they told us about their favourite experiences of the day, listened to a speech by Winston Churchill and said prayers for fallen soldiers and peace before finishing with listening to the Last Post.

Thank you to the Allchurches Trust for their support across our Education and Outreach programmes.