Praying with our Lady of Liverpool 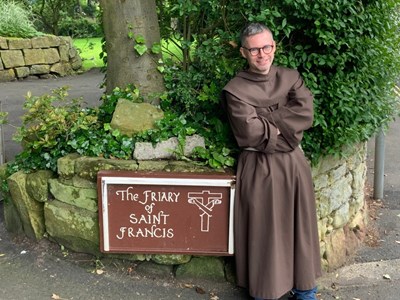 As we welcome Brother Finnian, an Anglican Franciscan, Canon Philip Anderson Introduces the Scriptural Rosary which Brother Finnian will be leading us in every day until 21st August. Join him in the Lady Chapel from 12:45pm to 1:15pm

The earliest place of Christian worship in Liverpool was by the Mersey, on the present site of the parish church. A small chapel dedicated to Mary, probably drawing on her ancient name ‘Star of the Sea’ was built sometime early in the second millennium; a place where sailors would pray for God’s blessing before a voyage and offer thanks afterward.. Mary had prayed by the grave of her son in the darkness before the light of Easter. There was a graveyard by the chapel. And there was an image of this woman who carried God within her; the first Christian disciple. The statue of the Madonna would have been blackened by soot from the candles lit in prayer. At the Reformation Liverpool’s image of our Lady was lost, perhaps pulled down as an idol, or hidden, never to return.

In the centuries since, and as the port grew, sailors went from here across the world. Millions of migrants passed by the church at the Pier Head, and offered up prayers for the new life ahead of them. Far from the Mersey, slave ships with Liverpool crews shackled Africans, for sale to plantations in the Americas. They cried out to the heavens. Others came to settle in Liverpool, and many millions prayed with Mary as they sought to hold to the faith of God with us, revealed in Jesus. When Liverpool Cathedral was built the Lady Chapel was the first part to be completed and opened for worship, a few years before the First World War. On St James’ Mount, watching over the city and river, disciples of Jesus Christ have prayed with Mary for a century, for peace, justice, and salvation for the city and the whole wide world, ‘My soul doth magnify the Lord’.

The rosary is a tradition of Christian prayer promoted by St Francis of Assisi. He believed that God was calling him to help renew the Church in prayer, and was inspired by St Luke’s description of Mary pondering these things in her heart. The rosary uses prayer beads to help focus the body and heart on the mysteries of the Gospel. The scriptural rosary invites us to be with Mary as our friend and fellow disciple, as witnesses to the wonderful love of God revealed in Jesus. The only qualification you need to pray the rosary is a desire to know God more deeply.

From Tuesday 17th to Saturday 21st August Brother Finnian, an Anglican Franciscan, invites you to join him in praying the Scriptural Rosary in the Lady Chapel of Liverpool Cathedral, from 12:45-1:15pm