Professor Ian Tracey gears up for a special anniversary 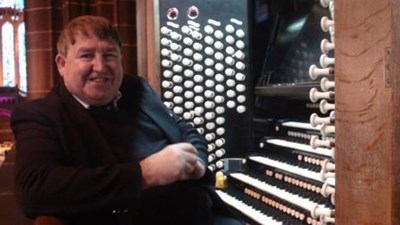 As we approach the 90th anniversary of the consecration of our magnificent organ we spoke to Ian Tracey who will be playing the recital.

As well as being the 90th anniversary of the consecration of the organ, this year marks the completion of Ian's 36th year as Cathedral Organist, and  50 years since he first played the cathedral organ as an organ student.

A historic anniversary warrants a programme to reflect the occasion and Ian has carefully selected pieces that nod to his illustrious predecessors Harry Goss-Custard and Noel Rawsthorne.

“I am aware that I may well not be playing the 100th Anniversary Recital” Ian commented, “so I wanted a programme that really reflected the history with nods to both Gossy's 40 years and Noel's 25. It’s something of a tradition for this style of programme at the Anniversary, enabling the recital to reflect the past, as well as looking to the future for this magnificent organ in our amazing cathedral.”

So Ian has chosen Goss-Custard’s arrangement of Mendelssohn’s Scherzo from 'A Midsummer Night's Dream' as well as a piece Noel Rawsthorne composed for Ian for the 75th Anniversary -  Phantasie  on the Chorale ‘Wachel Auf’. “ Noel’s piece is a demanding piece to play but it is very enjoyable ” said Ian, “We have always used the Anniversary recital to mark not just the great organ but also those whose lives have been bound up with playing this magnificent beast”.

For Ian, Liverpool Cathedral organ has played a central part in his life; he came to recitals when he was in primary schol, inspired by his organist grandfather who took him to recitals at both the cathedral and St. George’s Hall. Showing an aptitude for the instrument at an early age, Ian began life in the cathedral loft at the age of 15, and after posts as Organ Scholar and Assistant, took over from Noel Rawsthorne in 1980. He is a part of an almost apostolic succession, being one of only three cathedral organists’ since this instrument was consecrated in 1926.

Along with his role as Chorusmaster to the Liverpool Philharmonic and Organist of the City of Liverpool, Ian has built up an international reputation, playing on many of the great cathedral and concert hall organs around the world and recording numerous CD's. He sees this work as an ambassadorial role for the City and Cathedral “being privileged to play around the world helps to create a global audience for recitals at the cathedral, with many making special efforts to come to occasions such as the Anniversary recital. It is a real pilgrimage for many, with a large number coming from Europe and regular visitors from USA and New Zealand. Organists tend to build their travel itinerary around this particular recital, which is an honour but also a great responsibility.”

Of course, since its consecration, Liverpool Cathedral Organ has attracted a great deal of attention. Designed as the largest musical instrument ever conceived, its building was made possible thanks to the generous donation of Mrs Barrow, a city merchant, and on the whim of her nephew, Walter Ridley, who wanted to be able to play on a large cathedral organ. In the early days, this recital was so popular that special trains – known as the 'Willis Specials' – were laid on to bring people up from the South of England.

For Ian, the love of playing on such an iconic instrument drives and sustains him in the hours of practice which goes into each of these recitals. And despite having many familiar pieces in his repertoire, he always finds new works and different interpretations. “I certainly don’t play in the same manner as I did in my younger years; back then I clearly had more of the energy which youth affords, but experience teaches you different things about the instrument, the acoustics of the building and gives you a much more mature approach to composer's vision and the historical and musical perspective, all of which age and experience teaches. I am looking forward greatly to the recital, for being an occasion to play some party pieces and to pay tribute to my great predecessors, whilst celebrating another milestone year in the life of our iconic and world-renowned instrument".

About the Organ Recital
The recital takes place on Saturday 15th October immediately after the 3.00pm Evensong, as it did on the 18th October 1926 when the organ was heard complete for the first time. See here for a prgramme and full details