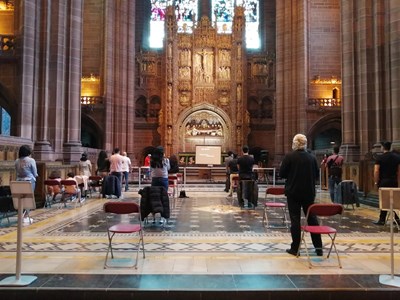 What a joy it was to join in worship with our brothers and sisters from our Farsi-speaking ‘Sepas’ community last Sunday – socially-distanced of course. It is the first time that ‘Sepas’ has been able to meet since we went into Lockdown and there was understandable joy and excitement. The vibe within that community is very special anyway, and the sense of buzz and fizz after these months apart was truly palpable. I am so impressed with the way that ‘Sepas’ does welcome and hospitality, especially drawing in the newcomer whether or not they are Persian, and building a strong sense of belonging. It is good to remember that Jesus would also have been steeped in the Middle-Eastern emphasis on family and community.

The friends and families of Sepas members who are still in Iran are very much in our prayers, not only because of the on-going ravages of Covid-19 across that land, but also the historic issues and challenges that have been faced by the country, its people and its leadership. Sadly, many of the headlines that reach us through the media here tend to portray the country in a negative light. It is undeniably true that there has been much going on that does not make happy reading. One thinks of the street protests at the end of 2019, which involved many young Iranians. Amnesty International estimated that hundreds had died in the crackdown by the authorities.

During Lockdown, one of the books that I have read is Jack Straw’s recently-published ‘The English Job’. It is subtitled ‘Understanding Iran – why it distrusts Britain’. The book has been very well received and recommended by significant players on the British diplomatic scene, as well as the Bishop of Loughborough, herself a Persian. Mr. Straw, a former Foreign Secretary in Tony Blair’s government, writes both from his formal dealings with Iran, but also from his more informal contacts, including taking his family on holiday there. He writes with a wonderful sense of warmth towards the people of Iran and in great appreciation for all that Persia has brought to the world over many millenia. He sets out lucidly, for a novice like me, the remarkable and complex history of that part of the world, as political, economic, social and religious forces have all played their part in shaping the Iran of today. I can begin to see why there is a simmering distrust of Britain, as we clearly haven’t always showered ourselves with glory in our dealings with Iran and have at various times intentionally exploited the country (and we are not alone there) in the last couple of centuries with very favourable (to us) agreements over telecommunications, tobacco and oil. That said, Mr. Straw also lays bare where he percieves that the Iranian authorities have not helped themselves over the decades, either in their dealings with Britain or on the international stage. Furthermore, I had not appreciated that ‘the Iranian authorities’ is not a single entity but a rather factional conglomeration of groups within the country and where, inevitably, power-play is at work.

I’ve occasionally chatted with those of the Sepas community who I have been able to contact through the Lockdown about what I’ve been reading. Their response is that, contrary to the popular notion, most Iranians, in their view, are warm and positive towards the UK and the West, seeing the benefits of us working together to enhance the standing of Iran on the world stage. They realise what a remarkable heritage they have and, I am sure, would love to see foreign currency flowing into Iran through tourism, for example. Especially in the more urban areas, society is progressive and open to change. I, for one, have received nothing but warmth and genuine friendship from the Sepas folk. I know that others feel the same. Members of Sepas are regularly involved here at the Cathedral, not only in the weekly Sepas service, but also taking part in some of our English-speaking services, such as the 10.30am Choral Eucharist on Sundays. One of the Sepas members serves on our Chapter, which has the princpal governance responsibilities for the life of Liverpool Cathedral.

‘Sepas’ means ‘thank you’ in Farsi. But ‘thank you’ in a far deeper sense than we often use that phrase. In the context of worship, it offers a deep thanksgiving to God for all his blessings to us. True ‘Sepas’ will engender a consequential response of worship and adoration in our hearts and lives. To that end, may I suggest that not only should we continue to give thanks for our Persian brothers and sisters and celebrate their ministry among us; may we also pray for the growth of warm and constructive relations between the UK and Iran. And let us all seek a bit more ‘Sepas’ in our own lives, day by day.

While you're here:
Why not prepare for next Sunday's worship? Our preparation sheet for adults and for children can be accessed by clicking on the Resources tab of our prayer blog, Prayer for Liverpool: https://www.prayerforliverpool.org/prayer-resources.html.