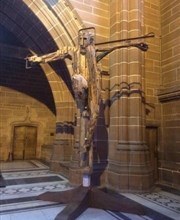 35 years in the making, the work depicts an alternate and challenging view of the Crucifixion.

Speaking in 2001, shortly after the creation of the piece, the artist said “the title and shape of this particular crucifixion resulted from my endeavour to come to grips with the enormity and significance of this event and the participation of the players in it.”

This crucifixion depicts a muscular, angry Christ who looks almost ready to leap from the cross. The relevance of the question that the artist poses with this piece, ‘What are we doing?’ resonates deeply in a society that currently diagnoses itself as ‘sick’ or ‘broken’.
“The much larger than-life Outraged Christ is made of carved and recycled timber shaped in the form of slats. The first Christians liked to show Christ victorious on the cross. The medieval period focused on his suffering for the sins of the world. The 20th century, too, emphasised almost exclusively the suffering of Christ — but, more often than not, as a paradigm of the suffering of a terrible century. The depiction of an outraged Christ is, so far as I know, a fresh addition to Christian iconography.

It is a moving, impressive work. Instead of Christ’s being shown battered or anguished, it depicts him with mouth open, slightly to one side, with his knees pushing forward from the cross, in rage. But here is rage — indeed, fury — not just at what is being inflicted on him, but at what we humans do to one another.

In the Hebrew Scriptures, there are those who protest to God at what is happening in the world. This is a familiar theme of the psalms, which continually cry out to God to act. One could say that, from this point of view, to pray is to protest at how the world is, in the name of a just God whose purpose is something different.”

Article extracts with thanks to The Church Times (19th August 2001) www.churchtimes.co.uk.