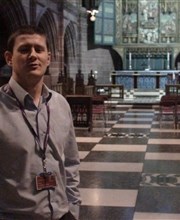 We hold the official launch of our Volunteering programme on Thursday - ahead of that we spoke to Paul O'Brien, Volunteer Coordinator about the programme and why he loves his job

Liverpool Cathedral has started a volunteer programme that aims to help some of the long term unemployed into work. Based on a scheme piloted by Manchester Cathedral we aim to help people develop skills, interview techniques whilst crucially giving them meaningful volunteering opportunities to put on their CV. And who wouldn’t want to have Liverpool Cathedral on their CV?

“the fact that it was based at the cathedral was an important reason for me applying” agreed Paul O’Brien the newly appointed Volunteer and Employment co-ordinator “and being in this magnificent place, walking to it for the programme is an important factor in attracting some volunteers. It draws people of all faiths and none as there is a different energy about the place”.

The reputation and role or our cathedral in the city is equally important for the scheme’s success. “Because of the cathedral it has been easy to get others to sign up to offer interview experience and offers of placements” Paul explained. “For example SmileWorks in Liverpool One and the Nettle Street bar Kabinett were quickly on board eager to work with us.”

The scheme needs more pioneering employers to join in. Their expertise helps teach the volunteers, over a ten week programme, a variety of skills in communications, presentation and interview techniques. This makes them much more employable and has led to the high success rate for the scheme in Manchester. For example the volunteer placements the cathedral can offer give a wide range of experiences for the volunteers. Another part of the success is the willingness of employers to guarantee interviews to those who wouldn’t normally make the shortlist due lack of experience or length of unemployment.

Paul attributes the rest of the success as being down to the supportive nature of the programme which takes people referred by the Job Centre service. “It’s a carrot not a stick and we work in small groups giving them intensive support in key areas. We find those in the group of about ten to fifteen people really help each other. Then, because of the small numbers I can then work with individuals to support them in the areas they most need it. That may be arranging particular courses in careers that they want to pursue, it will mean helping them with their own job searches”

It’s the helping people that Paul loves. Having worked in this field since leaving school he maintains “There’s no better buzz than someone coming in to say I got the job”. So he wants this programme, which has already been recognised by the Cabinet Office for its work in Manchester, to be the best in the country. “It has the potential,” Paul says “we could easily have more volunteers and more staff supporting them. This is just the beginning.”