Up, Up and Away as a Hot Air Balloon is inflated in our Main Space 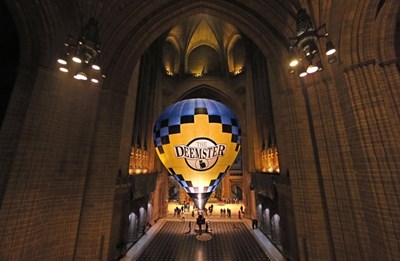 The inflation and take-off of the hot air balloon inside Britain’s largest cathedral are believed to be a world first event.  And the Cathedral is no stranger to reimagining how a building can be utilised. After all where else could you attend over 1,000 worship services per year, come to a gala banquet dinner for 800 people, dance to Cream Classics, attend a world-renowned organ recital, abseil 30 metres down the external façade and, last but not least, fly a hot air balloon up inside the Main Space?

Thanks to BBC North West for this fabulous video footage

You don't see this everyday in @LivCathedral...

It's a hot air balloon taking off, to say thank you to @Hamish_Ogston for donating money to save the cathedral's organ. pic.twitter.com/WgmeLZe8UK

The donation of £384,000 comes from Hamish Ogston CBE, a leading British entrepreneur and philanthropist. The service, on November 15, 2017, will feature specially-commissioned music – including a trumpet fanfare written by BAFTA and Emmy Award-winning composer George Fenton and the inflation of Hamish Ogston’s hot air balloon inside the Cathedral’s 174ft (53m) Main Space. When inflated the balloon will be 74ft (23m) in height and 62ft (19m) wide. The balloon will be going 49ft (15m) into the air. 105,000 cubic feet of air will be needed to inflate the balloon

Robin Batchelor, one of the UK’s most experienced professional balloon pilots who taught Sir Richard Branson how to fly, will be responsible for inflating and taking off with four choristers in the basket of the balloon inside the Cathedral.

“We are absolutely delighted and humbled by the progress we have made with the restoration of our magnificent Cathedral. As we celebrate this national treasure with its great traditions of choral and organ music, we give thanks for the support of all our benefactors, and especially today for the most generous gift of Hamish Ogston CBE as we look forward to completing the restoration of the Grand Organ.”

The Cathedral is a major focal point for the local community, used by many nearby groups and supported by lots of young musicians. The Grand Organ – which is situated in two chambers on opposite sides of the Choir – is one of Liverpool Cathedral’s greatest assets and plays an important commercial role, attracting national and international visitors. The organ has shown its age and has needed urgent repair. This restoration presents a wonderful opportunity to save an important 1920s instrument and celebrate the history, music and culture of Liverpool.

The money donated by Hamish Ogston will complete its restoration, which was built during the interwar period by Henry Willis & Sons, the renowned British firm of pipe organ builders founded in 1845.

“The Grand Organ of Liverpool Cathedral is internationally renowned as one of the greatest church organs in the world; when it was built in 1926, it was the largest musical instrument ever conceived, and is still the largest organ in the UK today.  With its 8 manual divisions and pedals, 200 drawstops, and its staggering total of 10,268 pipes it is one of the wonders of the musical world. Having been in continuous service for over 90 years, a major Appeal was launched in 2009 to which Hamish Ogston has been our most generous benefactor. We will give hearty thanks for that great munificence at a special service of Evensong, on Wednesday 15th November,  as fanfares of trumpets, full-voiced organ & choir perform the anthem specially commissioned by him, ' God is Gone up',  as his hot air balloon fills the Main Space and rises heavenward.”

Opening the service, a specially commissioned trumpet fanfare has been written by George Fenton, the composer known for writing film scores and music for television such as the BBC series ‘Blue Planet’ and ‘Planet Earth’.

The ‘God is Gone up’ anthem has been written by Richard Shepherd, the former Director of Development and Chamberlain of York Minster and an acclaimed composer of church music, to herald the uplifting of the balloon during the service.

“I am delighted to be involved in this truly community-based project to save Liverpool Cathedral’s culturally significant pipe organ. The restoration and preservation of this magnificent instrument and its history will ensure that the rich musical traditions of Liverpool Cathedral will continue to thrive for many years to come. I also hope today’s entertaining service with the hot air balloon helps to inspire other places of worship around the world to think about how they can use their majestic, but underutilised, spaces to raise substantial income each year and attract the next generation of visitors.”