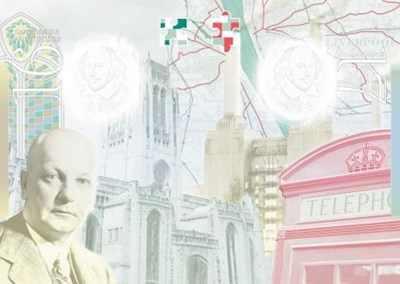 The latest design of the UK passport was unveiled this week. The latest design focuses on arts and culture in the UK over the past 500 years and we feature in a montage of work by Sir Giles Gilbert Scott.

A new passport is launched every five years and the theme for the latest version is ‘Creative United Kingdom’.

The latest design features cultural icons such as William Shakespeare, Charles Babbage and Ada Lovelace, and Anish Kapoor, as well as landmark structures like the Angel of the North, Titanic Belfast and ourselves, Liverpool Cathedral.

“I am proud to launch the new United Kingdom passport which celebrates the creativity of Great Britain and Northern Ireland over the past 500 years to the present day.

“HM Passport Office is committed to ensuring the integrity of the passport, and the chosen designs have allowed us to make use of evolving technology to further enhance its security.

“Not only are we constantly striving to stay one step ahead of those who seek to undermine the passport, but we have created a document that marks just some of the greatest creative achievements in the UK.”

The new passport will be rolled out in a phased approach with the first due to be in circulation from December 2015.

The Dean of Liverpool The Very Revd Dr Pete Wilcox said "We are delighted that an image of Liverpool Cathedral features so prominently on the new passport alongside other examples of the architectural genius of Sir Giles Gilbert Scott.  How fitting that our iconic cathedral, perhaps the greatest British building of the 20th century, will be transported across the world on an iconic British document, as a symbol of historic British ambition and contemporary British values".

The full design can be found here - https://www.gov.uk/government/news/new-uk-passport-design-launched