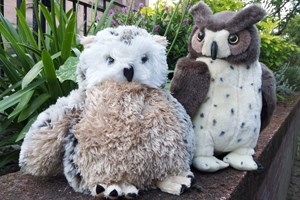 Read Canon Neal's blog all about International Owl Awareness Day, which covers some interesting facts about the species and what we can do to help with Owl conservation.

I am sure that you always wanted to know that today is ‘International Owl Awareness Day’. Many of us have been introduced to owls through wonderful children’s story-books, such as ‘The Owl who was afraid of the Dark’, Winnie-the-Pooh and the Edward Lear poem, ‘The Owl and the Pussycat’. But how many of us have actually seen an owl?

The nocturnal habits of most owls make a close encounter of an owl kind much harder; although perhaps we have heard one screeching, as they can be very vocal. Contrary to popular mythology, individual owls do not go ‘tu-wit, tu whoo’ though! (Sorry if that shatters a cherished childhood belief!) Rather the Tawny Owl ‘song’ is a mix of the male and female calling to each other. They are the owls which are most likely to be heard in urban areas, involving a mix of hoots and screeches to communicate with one another. In one of my former parishes, we decided that it would be a great idea to put up an ‘owl box’ in one of the trees in the churchyard, next to our vicarage. To our excitement, an owl family moved in the following year. What was less fun was that, when the two fluffy youngsters fledged, they would sit on the branch near the owl box squawking loudly all night long, demanding food from their  parents. This went on for weeks! We were very grateful when they finally flew the nest, and we could get some undisturbed sleep again!

Barn Owls, which those of you in more rural areas may be fortunate enough to see floating over the fields and hedges at dusk, make rasping screeching noises. Farmers love them, because they help to keep the vole and mouse populations under control. They are beautiful birds up close but the closest that most of us are likely to get is at a bird of prey centre. Also, in our countryside are Little Owls, which are very cute and appealing. At places such as Lunt Meadows in Sefton, Short-Eared Owls may be seen, hunting in broad day-light. Their ‘long-eared’ cousins are more difficult to find, and not regularly seen in our area.

Another popular myth about owls is that they are very wise. When I graduated, my wife gave me a small cuddly owl, complete with mortar-board. Alas, owls are not that clever, compared to many other birds. (Top of the league of ‘smart’ birds are the Corvids, members of the crow family, such as crows, rooks and magpies.) Not all owls nest in trees; some live on the ground, or even underground – the burrowing owls. The Bible refers to owls being in the wilderness and ‘waste places’ (Psalm 102, verse 6), in arid desert habitats where there doesn’t seem much prospect of life. So they are definitely quite adaptable birds.

Sadly, like many bird species, a fair number of owls are in decline around the world, due to habitat loss and climate change. Often it is the apex predators, such as owls and other birds of prey, that are signposts of problems right down the food-chain. Yet there are groups of people in every continent that are working hard to raise awareness, and owls as much-loved creatures are great emblems for conservation efforts.

Perhaps you could do your bit for owl conservation? If you’ve got a garden with a good-sized tree, maybe there is scope for putting up an owl-box – they are not difficult to knock up from old timber, such as broken palettes. Or visit a local owl or bird of prey sanctuary to see owls close up and learn more about them. You can find them easily enough with an on-line search. Two that are within a day’s drive of Liverpool, are the Turbary Woods Owl and Bird of Prey Centre near Preston and the Hawk and Owl Centre at Muncaster in Cumbria:

To find out where you can have the best chance of seeing owls locally in the wild, then visit the website of our local branch of the Wildlife Trust

And if you want to find some cracking children’s books to read about owls, then visit: International Owl Awareness Day | Oxford Owl

I hope that you enjoy ‘International Owl Awareness Day’ – it will be a hoot!

P.S. If you want to see and hear birds of prey in the heart of Liverpool, why not take a trip to Liverpool Cathedral to experience our peregrine falcons? They are seriously noisy! You can see some pictures of the falcons, taken by Dave Graham, on BBC Radio Merseyside's Facebook page.